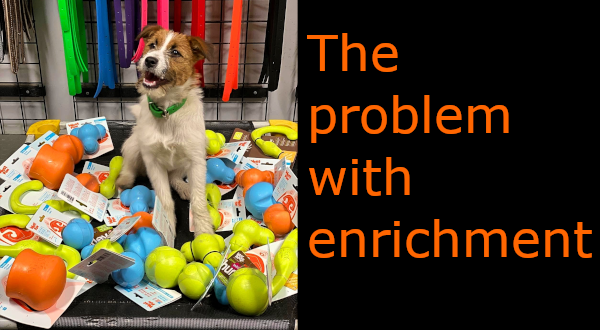 Enrichment has become a term that is being used prolifically in the dog world the last few years. It’s like the latest buzz word!

New puppy owners are encouraged to find ways to ensure their puppies stay enriched, are never bored, and always have something on hand to keep them stimulated.

Dog owners with dogs that are anxious, destructive, reactive or have any number of behaviourial or training issues are told to ensure their dog is given plenty of enrichment particularly at times they may display unwanted behaviours.

There is no question that enrichment is important, and that these things can be really useful to have on hand – but they should not be used in place of giving a pup or dog effective training.

I had one of my dogs at a specialist vet we have seen a few times recently and she told me she had recently gotten a puppy. She had taken it to the local puppy class and was really surprised to see how much had changed since she had last raised a pup. When I asked her what she meant, she told me these days everything was about “enrichment” – keeping a puppy constantly entertained, but not actually teaching pups how to relax and settle. Pups in the class were given constant stimulation in the form of licky mats, treat dispensing toys etc.

It may look like pups are relaxing while engaging with these toys or long lasting chews, but if they can only ‘settle’ until they’ve finished eating, they aren’t actually learning how to settle. They are being distracted by the food, and at some point you’ll either run out of food, over feed them, or they get too full to want more.

This really matches up with something we have been seeing day to day in training and behaviour cases at K9 Pro HQ.

We have many clients who will come to us after months and sometimes years of training with other trainers where they have been told any time their dog may misbehave – say visitors coming to the house, when around other dogs, when they are demanding attention from the owner or won’t sit still etc – to use enrichment. The dogs jump all over guests? Distract them with an enrichment toy. The problem if their dog has anxiety? A lack of enrichment. If the dog is a nuisance barker? They must not have enough enrichment… I had one client who said they could not possibly purchase “one more bloody licky mat” as they already had dozens and were being told it still wasn’t enough to keep their dog “enriched”.

In that case, the dog’s actual issue was that it had been given far too much freedom, no effective training and had no rules and boundaries at home. It had every possible style of enrichment toy available to it but distracting it with constant stimulus was not teaching the dog HOW they should be behaving.

Distracting dogs with constant stimulus is not teaching the dog HOW they should be behaving.

Funnily enough, I had experienced a similar issue many years ago with one of my own dogs, though this was before enrichment toys were as available as they are today. About 16 years ago I had a brand new Beagle puppy who I took to a puppy school run by a professional trainer. Those of you who have been following K9 Pro for a while will recognize this pup as Daisy “The Evil Beagle” who, throughout her life, worked REALLY hard to earn her nick name.

Daisy was a very full on little puppy who had an opinion on everything. Unlike the other puppies in the class, she could not “settle” on her mat, she would become easily frustrated and lunge and bark wanting to play with the other pups. She could learn tricks easily but as soon as the food disappeared she would immediately disengage, wanting to go off and sniff everything and eat the other puppies treats.

The trainer did not know what to do with her so to get her to settle, she would give Daisy a chew (for example a pigs ear) to eat on her mat. Daisy would be quiet while she ate and then the second she finished eating… “AROOOOO” she’d bark and carry on until the trainer would give her another treat to ‘keep her settled’… You can imagine she got quite proficient at quickly polishing off each treat and of course, as a Beagle, never got tired of eating more.

This locked us into a hostage style scenario where Daisy learned to bark relentlessly until we’d shut her up with a bone or treat to chew on, for at least a year, until I found a trainer named Steve Courteny who was able to help us…

Fast forward to today, another client I had come in recently was telling me how her friends visited with their 8 month old Lab pup, and it was quite naughty. While her dog (who she took through our puppy raising course) laid down to relax next to her while they were having lunch outside, the Lab pup “could not settle” or sit still at any point. Not unlike Daisy, the problem wasn’t that the pup couldn’t do it, but that it had never been taught HOW to.

One of the first things I teach new puppy owners is how to get their pup to lie down and relax on leash, so when they take them out and about to places like cafes Pup understands how to chill. I may teach this with food, but only to reinforce good behaviours pups offer, not to distract them from being naughty. I have them on leash so owners can learn how to keep the leash nice and loose, rather than restraining the pup and frustrating them with a tight leash.

Leaning how to lie down and relax in distracting places is such a critical skill that is so underrated, or is something that too many puppy owners just expect their pup to work out on their own or do naturally as they get older. Our experience though tells us this is not often the case!

When clients arrive to K9 Pro HQ they are brought into our training room and advised to keep their dog on leash. There are safety reasons for this when dealing with human aggressive dogs, but we request this largely so we can see how the dog responds when it restricted on the leash, which gives us some insight into the relationship between the dog and their owner.

Clients are advised to sit on the lounges in our consult room, with their dog, while we dive into the first part of the initial consult which is usually spent answering questions and explaining learning theory.

I work with dogs of all ages and I would estimate easily 90% of the dogs that arrive at K9 Pro HQ for their initial consult struggle to relax while their owner is sitting down, trying to explain the issues they are having with their dog.

Many times the dogs hit the end of the leash straining to get to us, or to sniff and explore the room, or demand attention from the owners by pawing at them, jumping on them and even barking at them until the owner relents and gives affection and/or food.

Sometimes the dogs get so frustrated at being held back when they are stimulated by the environment they start vocalizing, lunging, barking and whinging.

Sometimes, the dog can behave itself if the owner gives it something to chew on, or a steady stream of food treats. But the second this runs out, the dog is back to demanding behaviours.

This gives us information that the dog usually;

Often times the first thing I teach the owner to teach their dog is how to get them to sit and relax so we can carry out a conversation without the dog becoming frustrated.

This seems like such a minor thing but makes such a massive difference to the dog and the owner, who is usually extremely overwhelmed by their dogs behaviour.

Giving dogs enrichment in their environment is important, but equally if not more important is teaching them how to relax and self settle without needing constant stimulus.

As always we’d love to hear your thoughts in the comments below!

Bec has been mentored by Steve Courtney since 2007 and works full time at K9 Pro as the Senior Dog Trainer. She primarily works with dog owners to help them teach their dogs good life skills and general obedience, works with our board and training dogs to rehabilitate dogs with serious behaviourial issues as well as helping new puppy owners with puppy foundation training.
Previous Need help with your dog?
Next Why dogs are aggressive to their owners

You have a dog with a behaviour problem, he is aggressive to other dogs, she …