The Crate comes out of the baggage claim, how did Venom travel?

Out he came in his crate and I looked inside to see him, at that moment a lady from the car rental kiosk offered me some scissors and said “oh is the puppy scared, they always are…”

Venom came out of the crate like a bullet in prey drive, he latched onto me, tail up and on fire! This is one solid little guy!

I had parked in the short term parking and this meant we were in my truck in minutes. Just like the car trip from the Gold Coast to Brissy, he was quiet and relaxed in the crate.  We live about 90 minutes from the airport so I stopped at McDonalds on the way where I trained him with some chicken nuggets. He was admirably undistracted by the people around and our new environment.  Back in the car and we were home in 20 minutes. I was excited to show Al Venom. He came into the house flat out, he seems to only have one speed.

He came in and looked around at his new home. I played some tug with him, Al commented “heaps of adult dogs that come here have no where near that much drive”!

I took him out to the toilet and prepped his crate. Inside the crate he had, K9Pro Comfort Crate Pad, a Fireplug with some food in it and a Snuggle Pup. I have had excellent reports on the Snuggle pups but I was really stunned at how much Venom took to his Brown Mutt and loves sleeping with it. He was quiet all night and slept very well.

I had planned to work from home the following day so set up his Puppy pen in the consult room before going to bed.

Previous With some time before the flight to Sydney, we stopped at the park…
Next Puppy Exercise Pens, yes or no? 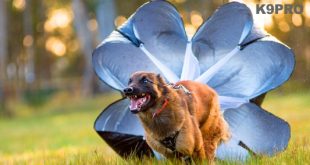