Do these Balance balls really work?

Just recently K9 Pro started offering FitPAWS products to our customers, at not even the end of the first day we have sold plenty and have lots more questions and so on.

I have to admit that when I first saw them, I thought of them as I do, or did, Pilates, because it is along the same core strength and trunk strength building lines.

I thought yeah sure, why not, but I didn’t expect much.

I started playing with these things about 6 months ago, using them with a few pups, a few working dogs, dogs that compete in dog sports and a couple of injured dogs.

I wasn’t expecting to see a whole lot but I have to admit I was wrong, they really do make a noticeable and obvious difference to the strength, fitness and ability of dogs, and the ones coming back from injury really benefited too.

I first noticed that when we had dogs new to this work, on say the Peanut, they were fatigued in only a few minutes just holding themselves on the ball whilst we gently rocked it. I could see muscle tremor in dogs I thought were quite fit, in only 2 – 3 minutes of doing what seemed to me, nothing.

As time went by with a few sessions a day, the dog’s stamina quickly increased and they were able to work longer on the ball. Sure it isn’t cardio but that can be a separate exercise and this is low impact, hence low risk too.

After a month on the Peanut one of our clients German Shepherd, Franco made great improvements in the heel position. How? Well he knew the position before but he always looked awkward and would step wide from his handler to keep eye contact. Franco is 5 but he seemed to have quite a limitation in his neck movement which our Chiro said was pain free.

The ball seemed to give him more flexibility and his head is now up. The added benefit was that, his overall movement is free and his drive is up.

Another was a Lab that has some elbow issues; she is an old girl and would limp around if she had to walk more than maybe 30 metres without a stop. Graeme used the balance disc to get her front legs on it and shift the weight back and forth on her legs, some small improvements were noticed over about 6 weeks but I hadn’t spoken to him for a few months.

He saw the release of the FitPAWS Gear and sent me this email.

“Hey Steve, you went with the Fit balance balls!, Susie is doing so well now, the first maybe 2 – 3 months the progress was slow but then  she started to get better almost every day. She now walk with Maree to our local shops to get the milk and bread, it is about 1 km return, I know not a lot but as she could barely make 30 m before, it is great. She has no limp either except when she wants some sympathy 🙂 .”

I have been looking at ways to work on the fitness and injury prevention of dogs that I train for sports and work, and as I have been so impressed by these, I will be working them in some how.

So I am happy to say that these products really work and for me, something I will be using a lot of.

I will make a video of Venom or Wisdom on the Peanut when I get a chance.

Previous Canine Fitness, core strength and rehabilitation
Next Thunder – How he lived 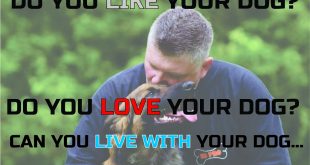