I lost my male GSD (Kayne) about a year ago at just off 17 years old, he was a very special dog that played a very important role in my career. I have my GSD bitch (Kandy) still who is 13, she was also a very strong building block in my life and career and I work and train dogs today with knowledge I gained from these dogs. 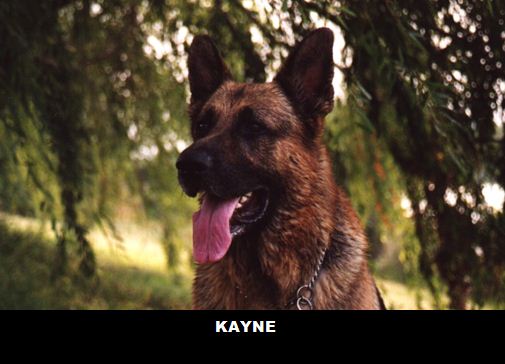 Both Kayne and Kandy were selected on similar traits, strong, driven socially dominant dogs of their litters. They both sought control of the puppies around them in their litters and this has continued through their lives, not so much with other dogs but people. Having the goal for both these dogs as man stoppers, this was a trait I don’t advise people to seek often. It isn’t of much use unless you want an out and out war machine, which I did at the time.

Although the V litter were all very similar in temperament for the first say 30 – 40 minutes, there were subtle differences that began to emerge, the large male that I really loved began to direct his attentions to engaging the other pups. He stood over them and really was looking, provoking a battle. Very similar traits to both my previous dogs and dogs I had chosen to purchase to train and resell, but I am looking for something else this time. Whilst a part of my work these days is training attack dogs, there are many other disciplines I train so I went for a more well rounded, balanced and driven pup.

Venom was chosen as his prey drive was still strong after 45 minutes of hard work, others dropped off but he never did, he seemed endless in his venture for prey drive satisfaction. His duration seemed endless compared to any pup I had come across in my career.

Could I have found this in a GSD?

There are a couple of GSD breeders that are producing dogs that I like, but my concern was that I would always be comparing this pup to the dog I have and have had, and I didn’t know if I could get dogs that would measure up.

It is true I love German Shepherds, but it is also true that finding a very good example of the breed that has strong prey drive and thick nerves is becoming a task. I wouldn’t say it is a given with a Mal, but it sure is obtainable.

When I get a dog for myself, I am not commercialised enough to wash that dog out and pass it on, it will stay with me for life even if it doesn’t meet the level I want. I would of course get a dog that will meet the need, but keep the first one too. This puts pressure on the selection process to be perfect.

GSDs will always be special to me, I have a couple of clients right now with GSDs that I like, but it is hard to match anything Venom is doing at 9 weeks.

Previous The first morning with Venom
Next Training Begins at 1