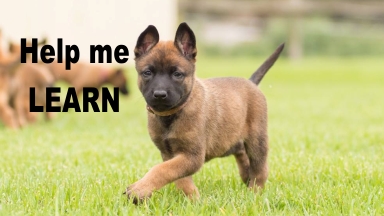 While I love training puppies and their new owners, a large part of my job is working with clients who have dogs (usually around the age of 12-18 months) that cannot control themselves around other dogs.

Most commonly these dogs will come to us for training and behaviour issues ranging from general bad manners to over excitement and lack of impulse control to reactivity and more extreme forms of dog aggression like predatory aggression.

Their owners are generally prompted to come for training because they are finding the dog is near impossible to control on walks. They are so desperate to get to other dogs they pull on the leash, lunge, bark, and are generally uncontrollable if they see another dog. This behaviour makes taking their dog for a walk stressful, frustrating, upsetting and they start to feel dread at the thought of taking their dog out. Going for a walk with their dog has become unpleasant, a punishment rather than something enjoyable. Their dogs quality of life is effected because their owners regretfully leave them at home when they’d otherwise take the dog out, if the dog could control themselves.

In 90% of cases these owners will tell me they don’t understand why their dog is like this because they “socialised them HEAPS” with other dogs. So why are they having these problems?

Anyone who follows our training will know that Steve is extremely passionate about educating owners on the importance of appropriate socialisation, see articles like “Socialisation, what is it exactly?” and “Socialise now, play later”.

If you have read these articles before, or come to see us for training, you will know that appropriate socialisation is a lot more complex than simply letting your puppy play with other dogs. But, that is not to say you SHOULDN’T socialise your puppy with other dogs – OF COURSE you should… and this is where most puppy owners make one of the biggest mistakes you can make when socialising puppies.

So where is the mistake made?

It stands to reason that we don’t want to raise a puppy who is fearful, unsure, hesitant or uncomfortable around other dogs. But socialising them to the other extreme of having too high a value for other dogs will cause the exact problems that see owners of adolescent dogs arriving in our consult room, day after day, week after week.

There is a huge misconception that to socialise your puppy with other dogs means letting them play with as many dogs as possible.

This is where the big mistake is made – socialising a puppy with other dogs is about more than JUST play. There are many other forms of dog interaction pups need to learn, like how to be calm and relaxed around other dogs, appropriate greeting behaviours, how to walk past other dogs politely on the leash, how to be around and see other dogs without expecting to greet or play with them etc.

Every pup is different

When I have a puppy I start by assessing its behaviour around a stable, adult dog I trust that is new to the puppy. I want to gauge where on Steve’s socialisation scale they are sitting when it comes to other dogs.

This provides me with information that tells me what my puppy needs in terms of socialisation with other dogs. For example, consider we have three different pups we expose to a new dog for the first time:

Puppy 1 is excited to see the other dog, shows no hesitation in approaching them, is confident and demonstrates nice play skill. We can assume this puppy has probably had a good education from their mother and litter mates in how to interact and play with other puppies.

This pup still needs more socialisation around other dogs so they can learn how to relax around them without expecting every interaction will lead to play. I also want to make sure the puppy can learn more fun will be had engaging with the handler rather than the other dog.

Bec teaching Blaze as a puppy to engage with the handler, rather than the distraction of other dogs. This encourages Blaze to see the handler as more valuable.

Puppy 2 is extremely over stimulated by the other dog, is overly rough, inappropriate and already demonstrating a very high value for the other dog. This tells me that this puppy needs more education on what appropriate play looks like.

I might let it have a run with my older female who is very experienced with pups and will appropriately correct over the top behaviour.

Puppy 3 is scared, hesitant, worried, overly submissive, runs away from the other dog or won’t approach it. This tells me that Puppy 3 has a negative value for other dogs. This could be a temperament issue, a flaw in genetics; it could be based on a bad experience the pup had or how it was raised in its first few weeks of life. Regardless of the reason why, this puppy needs extensive socialisation with dogs I know and trust so that we can build confidence.

I would encourage the pup to play with these dogs until it was showing more confidence and learned appropriate social skills and I would give it a lot of controlled exposure to other dogs where it learnt that every interaction isn’t about play but that we can relax around other dogs too. The goal isn’t to make them have a high value for other dogs, but a more positive one.

What should we do next?

In all of these scenarios you can see that regardless of where the pup is sitting in terms of value for other dogs, play is only one type of interaction they need to be exposed to and ALL puppies need to be socialised around other dogs until:

For some pups this may mean they need to be out EVERY DAY in their critical development period being exposed to and interacting with other dogs.

For some pups it may be enough to do this once or twice a week.

But when we tick the box of ‘dog socialisation’ because our pup has only had one type of interaction with other dogs – play, and lots of it – we are making a big mistake that will inevitably set us up for difficulty as our puppy matures.

I would consider my dog Blaze has been “socialised heaps” around other dogs – she has probably been around 1000 or so dogs in her 4 years of life. She has maybe played with 10 of those dogs. She is a dog I would say is very neutral to other dogs, she doesn’t ignore them, she is simply not interested in them.

Puppies MUST learn how to be calm and relax around other dogs. They can LIKE other dogs, but not to a point where the value becomes so high that they cannot control themselves, are incapable of moderating their emotions when they see another dog and the value for the handler pales in comparison to the value for play with other dogs.

Make no mistake that socialising pups with other dogs is a very important part of effective socialisation, but if we isolate socialisation JUST to play we will have issues down the track, just like the clients I see every day at K9 Pro HQ are experiencing with their dogs.

If we want to prevent the influx of behaviourial and training issues we are seeing in dogs we need to put more emphasis on educating owners on appropriate socialisation, what this is and how to do it, and move away from the misconception that socialisation = play.

As always we welcome your thoughts in the comments below!

Bec has been mentored by Steve Courtney since 2007 and works full time at K9 Pro as the Senior Dog Trainer. She primarily works with dog owners to help them teach their dogs good life skills and general obedience, works with our board and training dogs to rehabilitate dogs with serious behaviourial issues as well as helping new puppy owners with puppy foundation training.
Previous Your dog is normal
Next Science based dog training? Shut up and train the dog already!

The value of dogs to me

Well this is not uncommon to hear. In fact many times it kind of goes …