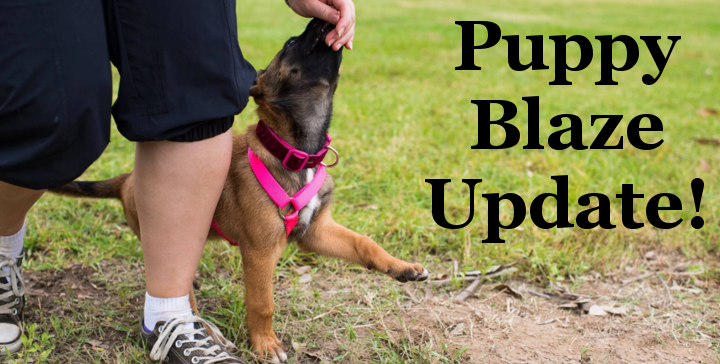 Raising a Puppy – The Journey So Far!

It has been a flat out month at K9 Pro, but I have finally had some time to sit down and write an update on how our newest (fur) addition is going. So without further ado, here’s my next blog post in our Raising a Puppy series, which details all the things Puppy Blaze has learnt so far.

For those of you who follow our blog and training videos regularly, you will know that Steve’s puppy raising program approaches developing pups a bit differently to the norm.

Most puppy schools focus on teaching you to get your pup to sit, down and play with other puppies. I have to admit that I haven’t taught Blaze to sit or down yet – so what has she learnt?

I haven’t raised a pup in almost 10 years, so I was very keen to get everything right and do as much as I could. However, one lesson I learnt quickly was that it is much easier to focus on nailing a few basics first, rather than try to do everything ‘on the list’.

The first week I focused on making sure Blaze could live in the house easily, and knew what to expect in her new home. This meant that the main goals for the first week were making sure she was crate trained, toilet trained, learnt how to engage with me and could self settle in her puppy pen.

If you are wondering what the benefits to crate training a pup may be, you can read our article ‘Top Ten Reasons for Crate Training’ here.

Steve’s puppy raising program doesn’t allow the pup to learn to toilet in the house, so we don’t give the pup newspaper or puppy pee pads to toilet on which means we have to be vigilant to develop the right toilet habits from day one.

I set my phone to remind me to toilet her every couple of hours, which prevented her from developing the habit of toileting inside. This also meant I could put toileting on a cue (I use ‘go outside’) which is very handy when you need to toilet an adult dog before a car trip, entering the trial ring, etc.

At night before going into her crate I made sure she has been fed, was toileted and tired (because I had played with her) so she had no reason to whinge overnight and was happy to settle in her crate.

This may sound like a bit of work, but getting into the right routine with your puppy from day one means that is MUCH less stressful in the long term because you are preventing any bad behaviour from occurring, rather than letting your pup experiment and then reacting to your puppy doing something it shouldn’t be doing (that you let them learn!). You can read more about how we approach this in Steve’s articles ‘Distraction Proof Your Puppy’ and ‘Socialisation – what is it exactly?’.

Rather than focusing on teaching commands like sit and down, I worked on building a good relationship with Blaze where she developed value for me and the rewards I had to offer, as well as building the basics of a communication system so I could reward behaviours I wanted to see again.

This meant when I took her out and about to socialise her, I could set her value for new experiences. Here’s an example in a short clip from when Blaze was 8.5 weeks of age, taken the first week she had been home with me.

This video was taken at a busy dog show, and was filmed by a person Blaze had never met before. She likes people, so when my friend Jen (who was filming) called her over, she jumped on her to get cuddles and attention. Because I had pre-conditioned a recall (pup-pup-pup) and made sure Blaze had a high value for the rewards I have to offer, she immediately recalled away from a distraction she was invested in.

Had I put Blaze in this situation without these communication tools and value for me, the outcome of that exercise would have been very different – she could have learnt to ignore me in favour of investing in a distraction like another person.

So – by the end of Week One, I had a puppy who only had a couple of accidents inside (that were my fault), was happy to be on her own in the pen whether I was home or at work and happily slept in her crate overnight without a peep. I also had a pup who could recall away from distraction, and understood how to earn rewards from me. So far, so good right?

Weeks Two and Three were all about further developing Blaze’s food and prey drive, and doing lots more socialisation. Some of the places we went to included;

Going on all of these outings allowed me to get Blaze used to car travel (and she travels in a crate, so this also further proofed our crate training) and the main focus on each outing was exposing her to lots of new experiences, and getting her to go into food and prey drive in new environments.

I also started letting her spend some time in the house with me, obviously under strict supervision, so she got used to coming out of the puppy pen and ‘chilling’ out in the house. She quickly worked out what the fridge is for (LOL!)

By now, I had a puppy who would go into drive on cue (I use ‘ready’) in a range of different environments, purely on verbal cue (no need to see I had food or a prey item). She could give me hard eye and sustained eye contact, could out the tug on command and understood not to strike it until I said ‘yes’.

She could also strike the tug without me needing to put any movement in it. These may sound like minor things, but they are part of building something invaluable – a solid communication system where Blaze understands how to earn reward from me. She was also learning self control, and further developing her value for playing with me rather than investing in distraction.

Here’s a snippet from one of our outings to a busy shopping center.

(Her out broke a bit under distraction here, so we did a lot more tug games out and about to fix this)

Having a good communication system meant that training more complex, new behaviours was easy. In Week Three we introduced scent work to Blaze and she learnt to find my scent from a row of scent tubes, then at the end of the same week we drove down to Canberra for the K9 Pro ACT Worskshop. This was a great way to put my training with Blaze to the test! I was delighted with how she went. These were the highlights:

Both Blaze and her brother Brannox were in Canberra for the workshop, and one comment we heard a lot from attendees that day was, “Those puppies have better handler focus than most adult dogs I know”. Of course this is also credit to her awesome genetics care of Herzhund Malinois, but those genetics can work against you if you don’t shape them the right way.

I still hadn’t taught Blaze to sit or down, but the things she could do and do well by the age of 11 weeks are important life skills and foundations that she will need for the rest of her life.

So now we have caught up to where Blaze and I are at in training today. This week I have started training her some new activities, such as this one we call the ‘tub’ exercise (for obvious reasons!). Training the pup to target and stay on a tub has many advantages, it forms the basis of the stay and sendaway exercises for example.

When you have dogs who are highly motivated to work with you, getting them to move away from you can be a challenge, so we train this early on. Note how she stays ‘loaded’ and focused even after I say ‘yes’ and give her a food reward.

This is obviously just a small recap of the things we have covered in the last four weeks, but I hope it gives you some insight into what we focus on when raising a puppy. Next on the list for this week is training the beginning of loose leash walking, continuing with lots of socialisation, and I might even train a position like sit or down… or I might leave that for later 🙂

As always hit the comment below with any questions or thoughts you have, or topics you’d like us to cover on puppy raising!

Steve Courtney is a Nationally Accredited Canine Behaviour Specialist, Obedience Trainer, Law Enforcement Dog Trainer and ANKC Breeder. Steve has been training dogs all his life and in these articles he shares with you his experience...
Previous I bet you can’t train my dog
Next K9Pro Angels – Canines for Child Therapy