Play with your pup – by Dr Naroa Etxebarria

Dr Naroa Etxebarria is a client of Steve’s that first met Steve through her German Shepherd Jieki and as time past she has stepped into the drivers, or perhaps passenger seat of the Ferrari, Herzhund Alis.

As a quick side line, Herzhund Brannox is going to live in New Zealand and work in Scent detection with his new owner. In the lead up to transport (between 8 – 12 weeks) Naroa boarded Brannox and started the 16 week challenge with him, during a conversation with another B litter owner, Naroa shared this information and we thought it would be great to share with you on why you should play with your pup.

I was thinking about the way (method/concept) that I use when I “play” with my dog and I thought I would “record” it on paper for reference.

Here is a summary of what I try to achieve through play that Steve asked me to share with you.

When we are kids, we learn about life through play, the same happens with pups of course. The challenge is to show the pups all we want them to know using games and play.

Sorry in advance, this is very philosophical!

I think (from my experience in training with Steve) it is a two way game, two sides with similar chances of winning. 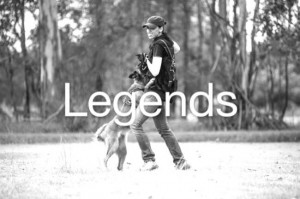 I like to think of play as a tool to empower the puppy, to grow its confidence, enjoyment around me and the feeling of having fun together with me. It is a great teaching, motivating and engaging tool.

I used to play one sided games, where I was stronger and the puppy would learn to hang in there, with no real chances of feeling strong or more powerful.

So I try to come down to the puppy’s level, make him try but have him believe all the way through that his likelihood of defeating me are similar to me defeating him,  setting a challenge with an unpredictable outcome.

As a Communication Tool

I use play to communicate with the puppy at the basic emotional level. Given dogs don’t talk (mine doesn’t anyway! lol), I have always found it really challenging to communicate effectively with a dog.

What a challenge this is but when I use the system Steve taught me I can pass a clear message to the puppy.

Play is such a powerful tool to connect with the pup I think, to make them feel good around you. If you feel good around someone, you tend to find ways to spend more time around them, you want to be near them.

And this is not just the pup, but me too! A game I like playing is when the pup got distracted and you get the chance to get away and hide behind a tree or bush, and the puppy start to desperately hunt you down, and from your position you cannot see the pup coming and all of a sudden he is there and he got you!!!

How exhilarating is that build up! (I’m such a kid). I believe the pup enjoys the moment that finds you too.

The pup is encouraged to try hard for the reward, learns about flying and taking off rather than hitting the breaks and suppression

Play is the tool for the foundations of the agreement you sign between him and you. Where you show him what the rules are and you teach him a fair game.

If you think of kids, or even babies that cannot communicate with words that well or at all, the relationship you establish with them is through eye contact, facial expressions, behaviour, the general mood you are in, tone of voice you use, timing of your interaction, intensity of your touch, gaze, … how powerful is this, and we can use all these tool with the puppies!

Through play you show the pup you understand what he likes, what he needs and that you can provide all the basic needs if he engages with you.

You start building that so important trust between the two of you. You never cheat on the pup, if you promise a reward (Yes! Or click), the reward is there, ALWAYS.

For the pup to be itself, move around, run wild, chase you/toy like there is no tomorrow, engage you or not (with positive or not very positive consequences , i.e. boredom if he wonders off….). You let him chose, and he decides what to do, of course what you want him to do must be beneficial to him to. Play is always beneficial to a pup!

He thinks he chooses well, he thinks you rock for being there when he chooses to engage in a game or tug, he realizes there is no game without you etc.

Hence I let go of the toy often, and encourage the pup to re-engage, so that he chooses to come forward to you with the toy.