Management of a puppy, toilet training and housing

With the first week behind us we have swapped Venom onto a full raw diet with supplements and have a balanced tummy, he has settled in very well and we are truly delighted with him. So how do I manage him in my work / life / family balance? It isn’t hard with some pre planning I promise you.

First keeping him out of trouble and making sure were reinforcing toilet habits properly. This is done by the use of a puppy pen, crates and exercise. We use the puppy pen so that he is not restricted to a crate and can move around but cannot move around with unlimited opportunity. Coming out of the crate or puppy pen is a signal that I have reinforced so that he toilets on cue. This is extremely useful and provides a cleaner, more accurate approach to toilet training.

There is great detail I cover in my crate training program but I have to say that our K9 Pro soft crates and Wire Crate covers make a big difference in crate training as the openings have flaps that block visibility. This can help stop pups and dogs becoming over stimulated by your presence or movement around them when they are in the crate.

Some of the basic steps of toilet training are knowing firstly a puppy’s toilet habits and developing knowledge of your puppies toilet habits.
How long after eating will your pup need to toilet?
How much fluid should your puppy intake before bed for the night?

All important factors and here is what I do. When I intend to crate the pup or pen the pup I will leash the pup up and take it to a place to toilet, grass area is my preference. I will not at all speak or play with the pup, but stand quietly and not let the pup run around. I wait a full five minutes before moving to an area close by if the pup hasn’t toileted. When the pup begins to go I give quiet calm praise until pup is finished. Then I will take the pup inside and into the crate or pen.

During daytime I keep a Buddy Bowl in the pen so my pup has access to water, but that is removed at approx 8pm at night. Every two hours the pup is taken outside to toilet in the same manner as above. It doesn’t take long before the pup is going instantly when he hits the grass. It is at this time that I pair a cue with this exercise, like “go to the toilet” or whatever works for you. Through this “Pavlovian pairing” I can actually instigate the behaviour. haven’t met a healthy 8 week old pup that cannot hold for 2 hours, I want to though over the coming weeks increase this time during the day.

At night Venom will be inside with me in his puppy pen, he comes out to work, eat etc and as I mentioned, at 8pm water is no longer available. I limit his fluid intake so that he can limit the fluid output. Some people don’t like this idea, but it is common for parents to do the same with children who wet the bed, in the end I am sure the pup would rather be thirsty that soaked in its own pee.

Between 8pm and bedtime, approx 11pm in our house, he will come out, play, train etc a few times. At 11pm he is taken to toilet, knowing him as I do he usually will pee but hold solids until the morning. After this he is taken to his crate and into bed he goes, he has a Snuggle Pup with him but no squeaky toys, food etc. He is there to sleep and sleep he does. Since he came home he can manage the whole night in his crate, quietly without any toilet breaks. That’s 11pm to 6.30am or there about. Soon as he is up it is straight to the grass to pee, he commonly will drop solids within 2 minutes by now.

Something that can really help this process is to create a system in which I can shift the balance of energy, let’s say that I want to teach Venom to relax in his puppy pen, this starts with doing some drive training, tug work etc, when he is nice and satisfied we finish off with a couple of focus exercises and then I put him in the pen and treat him for going in and hand him a pigs ear. I hold onto the pigs ear until he is deeply engrossed in it and then I let him have it. In these early days I keep an eye on him so that if he gets bored with it or starts looking for other inspiration, I redirect him onto the pigs ear again or a big soft toy that he can play passively with, but I don’t play with him.

I take some care not to only engage him in the crate or the pen when if he was barking or complaining to get out. I also don’t leave him in there so long that barking would be necessary. I don’t sleep him over night in the puppy pen but if he falls asleep in there that is OK with me too. Ideally I want to present the crate for a relaxed sleepy dog and the pen as a place where the puppy can be alert and with me but not annoy or bother me with constant attempts to play.

I use the puppy pen to feed Venom if I am giving him food in a bowl or something to chew, this doesn’t happen often as the majority of food he eats comes from my hand when he works. I don’t feed him in the crate as it can gain its association overnight when sleeping, but I do reward and feed sometimes in the puppy pens as this is going to be a good place for him to go.
I will add a K9 Pro Comfort Mat in his pen and eventually remove the pen leaving him mat trained.

If a toilet accident happens in the house, and let’s face it they always let one slip out, I will say “no” and take him directly to the grass, praise when he goes, this will happen only if I catch him in the act. If I find a mess, he doesn’t get anything for it.

It should go without saying that, punishing your dog, rubbing his nose in his waste etc is not going to do anything but teach your dog to avoid you. It will hinder toilet training as your dog will be reluctant to toilet when you’re around so you will lose the chance at teaching the pup where to go with the leash.

There are some people that like to or have to use puppy pads for toileting or newspaper, I am not one of those, I would prefer to make other arrangements. Rather than the dog toilet inside the home. 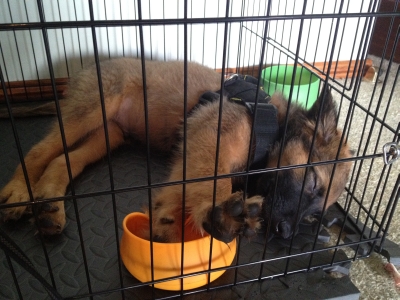 Previous It’s OFFICIAL
Next A Day with Venom