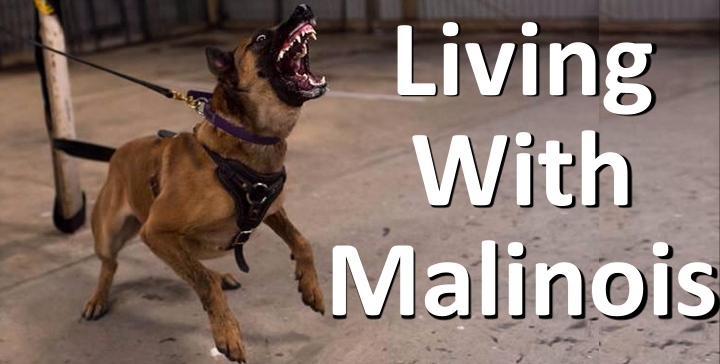 With the upcoming release of the movie Max, which stars a Malinois, there has been a lot of talk about educating the general public on what it is like to own a Malinois.

I thought I would give an insight into what life is like, from the perspective of someone who works for a professional training company, to live with a working line Malinois.

This is not going to be another one of those articles about Malinois where I tell you that I wake up at 5am and spend three hours walking and training my dog, lecture you about how Malinois aren’t pets or show you pictures or videos of my dogs destroying things in my house or behaving badly. I feel a lot of these articles miss the point about why Malinois aren’t suitable for the majority of people.

First and foremost our Malinois are our pets. This means they don’t live outside in runs or cages 24/7, they live in our house. While they ARE high drive working dogs, we do not accept that this means they can’t learn basic life skills including how to behave in the house. The difference between training Malinois to do this and the average dog, one like my Beagle, Daisy, is that the level of management required may initially be higher and teaching a Malinois to switch off is more of a focus than teaching them to switch on.

What you may not know…

Malinois are very affectionate dogs that have very close bonds with their owners, this makes them very protective by nature so you have to teach them that most people are your friends. Steve’s dog Venom has some serious ability but he is gentle with Steve’s children, they can even play tug with him and he tones it down for them, good luck getting him to be gentle on others though 🙂

As you can see in this video, our Malinois Wisdom is the same. She will adjust her drive so she can play nicely with Steve’s daughter Hunter.

As I type this blog post Wiz is currently asleep at my feet and has been in the office with me, calm and relaxed, all day. She must be a special, rare Malinois that has an off switch, right? Of course not – she has been raised, trained and managed properly so she is capable of chilling out in the office when I am not actively training her. This is behaviour we expect all of our dogs to learn.

So when I refer to Malinois requiring a higher level of management, what do I mean?

I mean that the consequences I might suffer if something goes wrong are much higher than it would be with a dog like my Beagle.

If Daisy is let loose in the house and is never taught life skills, the biggest consequences are that she will probably raid the bin, counter surf and steal food from people.

If I raised my Malinois without appropriate life skills, and let them run loose in the house, they would probably eat my house. I would likely come home one day to my lounge completely destroyed, skirting board chewed off the walls, and the bin annihilated into tiny little pieces, not just raided. So yes – Malinois can be destructive, but this is a product of poor management and training, not a breed trait. And while the consequences can be more severe when Malinois are poorly trained or managed, make no mistake that management and training is important with all dogs.

For example – check out these Whippets;

Leash pulling is a big problem for most pet owners. If I let my Beagle learn to pull on the leash rather than train loose leash walking, what is the consequence? That she would make our walks less pleasant because she causes me discomfort (leash pulling).

If I let my Malinois learn to pull on the leash rather than train loose leash walking, what is the consequence? Well I can tell you the most likely scenario which is one we see almost daily in high drive working breeds at K9Pro HQ. Leash pulling occurs when the dog is aroused and looking for stimulation, with prey driven dogs like Malinois this can lead to lunging on the leash, barking at and trying to bite moving objects they spot on walks, like other dogs, bikes, prams, skateboards and even cars. Imagine having a 30kg plus dog straining on the leash to chase after and bite the wheels of a pram – you aren’t going to be very popular!

If I don’t give my Beagle an outlet for her natural drive, she will look for drive satisfaction elsewhere like any dog. For a dog like Daisy this would be doing things like stealing food, barking, trying to escape the house or yard. But for a Malinois, their desire and need for drive satisfaction is much higher.  A Malinois without a good outlet for their drive may not just become extremely destructive, but dangerous and aggressive.

Are you starting to get the picture? It’s not that Malinois aren’t capable of learning basic life skills, but that the consequences when they aren’t raised, trained and managed properly are much more severe than the average dog.

I am not going to tell you that Malinois need hours of exercise and training a day, I don’t actually know anyone who is able to provide their dogs with hours of stimulation every day. I don’t know anyone, anywhere, no matter how dedicated a dog owner, who never has a day where they are (for whatever reason) unable to train their dogs. For this reason our Mals have to learn how to switch off. Steve calls this “setting reasonable expectations“.

We can’t have dogs that will go crazy or become uncontrollable because, for whatever reason, we haven’t been able to train them for a couple of days. Don’t get me wrong – owning, raising and training Malinois to make them into the amazing dogs they are capable of being takes a lot of time and commitment, especially as puppies.

Part of that time and commitment needs to be spent training the dogs to self settle and switch off so you have a dog that is controllable, with good management in place.

What is good management? For one, our dogs are crate trained – this means they will happily relax in their crates and stay there even when the crate door is open. I never have my Malinois loose in the house when visitors arrive. My puppy would learn that people will show up and reward her and my older female may see them as a threat to me and take action.

If I do let my dogs out in the house, they are with me at all times, in a down stay, or lying on a bed/place/mat. Or, I could let them run free and just follow them shouting “No” every time they happen across a behaviour or have an original thought.

This might sound strict but when you have a dog that has as much drive and grunt as our working line Malinois do, you need to make it extremely clear to them what behaviour you want them to be doing, or they will find 1000 ways to amuse themselves, 999 of which you likely won’t enjoy.

A big part of owning a Malinois is ensuring you give them an outlet for drive.

For Malinois this isn’t just food drive but of course PREY drive. Malinois as a breed have extremely high prey drive and the worst cases we have seen where they have become out of control, aggressive and dangerous have been situations where their owners have not adequately provided drive satisfaction. These dogs NEED an outlet, they need a ‘job’, they need work to do.

And no matter how good a handler you are, expect to cop some training injuries!

Every now and then I will stuff up my handling during a tug game, and the dogs will run into me or accidentally mouth me. Of course when you are training a Malinois, everything is extreme, including the bruising!

If I make a handler error when training Wisdom, our three year old Malinois, she will let me know what she thinks about it and might bark at me, jump up and snap her teeth in my face or even punch me with her snout.

Malinois are not a dog for the light hearted, they are like driving a Ferrari as opposed to a Toyota Corolla. The Corolla is safe and reliable but doesn’t go as fast as a race car. The Ferrari takes skill and finesse to handle, but drives like nothing else can if you can steer it properly.

If you aren’t experienced driving the Corolla, you definitely shouldn’t look at upgrading to a Ferrari. Malinois have more drive which means they have more to give, but that also means there is more room for error, and the consequences of ‘crashing’ one can be severe.

So love the breed, admire them, maybe even consider getting one, but be prepared to treat them differently to the average pet, because they can be so much more than that – in both good or bad ways, that depends more on you than them.

Know that we see more out of control, reactive, aggressive or fearful German Shepherds than we do Malinois, but just like Malinois raised and trained properly, the breed is not always like this. When you get a pup know that any dog can turn out bad. With dogs like Malinois, that bad can be extremely dangerous.

I asked Steve to read my article and make a comment, he gave me this line from the movie “The Terminator”.

Steve said “There is no fate but what we make”.

Get a puppy with the determined intention of training the puppy “every day” to cope and exist in your world, whatever that may be. 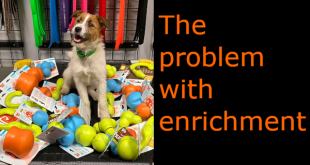