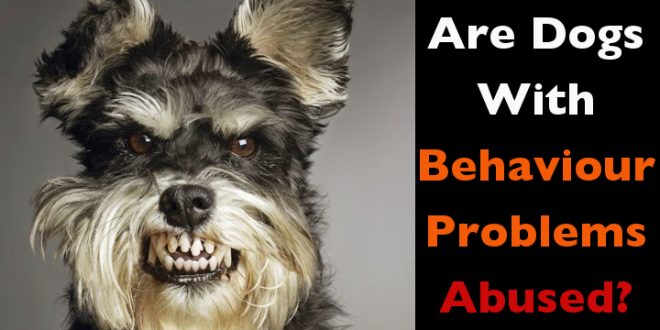 Are Dogs With Behaviour Problems Abused?

I was walking at our local markets with our young female Malinois, Blaze, the other weekend and I got chatting to one of the locals. They mentioned they had seen Steve and myself walking some of our board and train dogs in the area most week day mornings, and asked what they are being trained for? I gave the honest answer which is most of the dogs that come to us for board and train are need behaviour modification, often for issues like human and/or dog aggression.

The lady became visibly upset and asked how do dogs get like that? Are they rescue dogs that have been abused?

She was very surprised when I said no – in fact the vast majority of dogs we work with have been with their owners since puppyhood and are very much loved.

But how can that be? How can you raise a dog from puppyhood in a loving home, and have it turn into an out of control, aggressive dog? Surely it must have been abused, or rescued from a horrible situation? If you raise a puppy from early on, and don’t expose it to abuse, how could they end up with such severe issues?

The answer a lot of the time is a mixture of good intentions, poor advice from family/other professionals, failure to act pro actively rather than reactively and the ‘she’ll be right’ attitude many of us Aussies tend to have.

Sometimes it can start with poor genetics OR failure to choose a dog that is appropriate for your life style, skill level, and needs. That doesn’t just mean dogs from pet stores or puppy farms or backyard breeders – even some registered breeders can produce dogs with less than ideal temperaments, or sell you a dog that is completely unsuitable for what you need.

This is why we offer a litter temperament testing service so we can help owners select the most suitable puppy – and yes, sometimes that can mean Steve’s recommendation is he wouldn’t take any pup from that particular litter as it wouldn’t suit your needs.

This at times doesn’t mean the pups are no good but it may mean they either don’t suit your goals, are not displaying any evidence of the attributes that you may need to meet your goals, or of course there are temperament flaws with this litter and Steve is saving you from problems.

We believe a dog is for life and life is a long time to suffer the wrong dog for you.

We believe a dog is for life and life is a long time to suffer the wrong dog for you.

There seems to be a gross misunderstanding that if you raise a dog from puppy hood it can’t develop behaviourial problems, unlike rescue dogs which many people (incorrectly) assume come with a list of behaviourial issues.

All too often we work with puppy owners or owners of adolescent dogs who have some training problems we can clearly see will become severe behaviour issues if the dog doesn’t get the right training, and now.

Easily 85-90% of the dogs that come to us for serious behaviour modification are dogs the owners have owned since they were pups. Raising a dog from puppyhood is not a free pass to avoid having a dog that can be reactive, dog or human aggressive, anxious or fearful.

When we run a puppy class one of the most important points we drive home is to get pups out and socialise them as much as possible, from the moment you get them home.

Give them exposure, and lots of it, to new environments, people, noises, other animals, etc. Not just exposure, but ensure they are setting an appropriate value for these experiences.

What is appropriate value?

If you take your new pup out and it shies away from people, other animals or becomes nervous or worried in a new environment, this is a dog that could become fear aggressive down the track. They are demonstrating they have a negative value or unknown value for new or specific experiences, and need to have this value raised to avoid the behaviour getting out of control.

On the flip side, if you take your new pup out and it lunges on the leash excitedly to get to other people and other animals, can’t control its excitement and ignores you in favour of jumping all over another person or dog, this is a puppy that could also easily become aggressive or reactive, or completely out of control as an adult dog.

The pup is demonstrating it has too high a positive value for other people/animals, more so than the value it has for you and the rewards you can offer.

More exposure when pups behave either of these ways will be detrimental if it continues to rehearse fearful or out of control excitement. MANY dog aggressive dogs we see for consults started out as pups that lunged on the leash “just to say hello” to other dogs.

Remember, as Steve says, practice makes permanent, not perfect. Only practice behaviour you want the pup to repeat. Correct socialisation is assigning value to new experiences and environments, and teaching pups how to behave in those environments.

A lot of the time with puppies people develop the attitude of ‘she’ll be right’ when they see behaviour that as trainers, we would identify instantly as concerning.

I couldn’t tell you how many times I have heard the phrase “Oh I’m sure he will grow out of it”, but it is easily one of the most dangerous phrases a puppy owner can utter. If the dog has success with the behaviour, it will NEVER GROW OUT OF IT.

In fact, once a dog finds success with a behaviour it will become habitual. That means, they will continue doing it – forever – unless you can find a way to motivate them to change their behaviour.

And just like practice makes permanent with behaviour we want to see, the same can be said for ANY behaviour. The more practice the dog has jumping up, mouthing, pulling on the leash, barking, lunging at other dogs or people, etc the stronger that behaviour will become and the harder it will be to fix it.

Raising a puppy to grow into a stable, well behaved dog that is a joy to own is actually not a simple task. There is a lot of misinformation available about puppy raising, we see people offering courses who have either never raised a puppy (correctly or at all) or have raised one dog, next thing they are teaching others how…

If you start off with a pup that has a less than ideal temperament, or isn’t the most suitable puppy for your lifestyle, you are already fighting an uphill battle.

We offer both puppy raising consults for the general public and private classes for breeders to sell to their puppy owners, as well as one on one puppy raising courses. All of our classes, courses and consults are aimed at raising pups to PREVENT behaviour problems from occurring.

Just recently we had an owner come in with a dog, the owner was on the brink of tears as she had been told by another trainer that her dog was BETTER OFF being euthanised because his behaviour problems were so severe. I wish I could say this is an unusual occurrence, but it isn’t.

The dog was a typical of adolescent working breed dogs we see at the 12-  18 month mark. This particular dogs owners had;

As the dog got older it became stronger and harder to control, it is a vicious cycle that means the dog needs more time put into it, but it is almost physically impossible for the owner by this point to control it.

Once the dog started to enter maturity, it was barking and lunging on the leash aggressively whenever it saw another dog.

This isn’t a dog that had been abused, the owner did everything she believed was right. The dog had never been taught impulse control or vital life skills like recall or loose leash walking.

He wasn’t socialised in her most critical development period, and when he was socialised too high a value was assigned to other dogs.

Thankfully, the dog was typical of dogs we see here each day at K9 Pro HQ and we could easily help the owner get control back and teach the dog some new target behaviours that will make both their lives much better (particularly for the dog, whose next stop was the vet).

If you are about to get a puppy, or have one now, or you have an older dog with problems you need assistance with, pop us an email at info@k9pro.com.au – we CAN help you!

As always we’d love to hear your thoughts in the comments below!

Bec has been mentored by Steve Courtney since 2007 and works full time at K9 Pro as the Senior Dog Trainer. She primarily works with dog owners to help them teach their dogs good life skills and general obedience, works with our board and training dogs to rehabilitate dogs with serious behaviourial issues as well as helping new puppy owners with puppy foundation training.
Previous Are you a good dog handler?
Next Medicating dogs with Behaviour problems